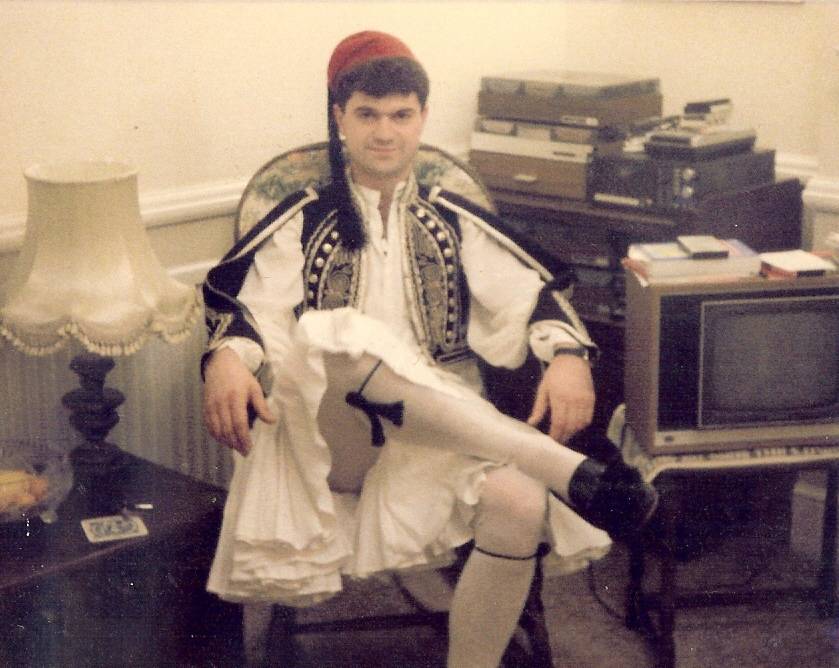 Greeks pride themselves on their patriotism. So what better way to show it off than by flaunting the Greek traditional dress code! And no, it does not consist of a white robe and flower garland.

Once worn by fighters in the 1821 War of independence, the national dress for the Greeks is called the Foustanella/Tsolias and now forms the uniform of the Evzones, the presidential guards.

The outfit includes a white, 400 pleated skirt, similar in style to the kilt, and an embroidered woollen vest. Pointed shoes with large pompoms called Tsarouhia, complete the look along with long white socks and a waist sash. (Left: my brother aged about 5 in his formal costume).

Other variations for the men include the baggy pants (karamani), white shirt (panavaki) and waistcoat (koumbouri) look. The outfit is topped off with a tassled cap (megalo fessi) and is worn on all the Aegean islands.

Women’s traditional dress usually involves a large headscarf and lots of gold jewellery…no, not quite the gypsy look but close! In central Greece the most famous female costume is the Karagouna. This traditional, very colourful wedding dress comprises of several layers including a black fringed white underdress, an embroidered wool coat and a richly embroidered waistcoat. A red felt apron is worn around the waist and everything is adorned with gold coins, including the headscarf, to signify wealth.

In Crete the costume is slightly varied, with the women wearing pantaloons and a more detailed tassle fringed headscarf. The headscarf is called the Mandili and is worn in mourning for the loss of the capital of the Byzantine Empire, Constantinople. The tassles dangling in the eyes are said to represent tears for those who died in the explosion of the Arkadi monastery, and when lowered is a sign that the woman is not to be approached. (So I would personally keep my tassles lowered at all times).

Quite how they all coped wearing these costumes in the high heat of summer I will never know. One thing is for sure, I will never get bored of using the picture of my dad in his traditional dress and gnome hat! And here is my brother (when he was about 4) below also in Greek traditional dress! Aww.