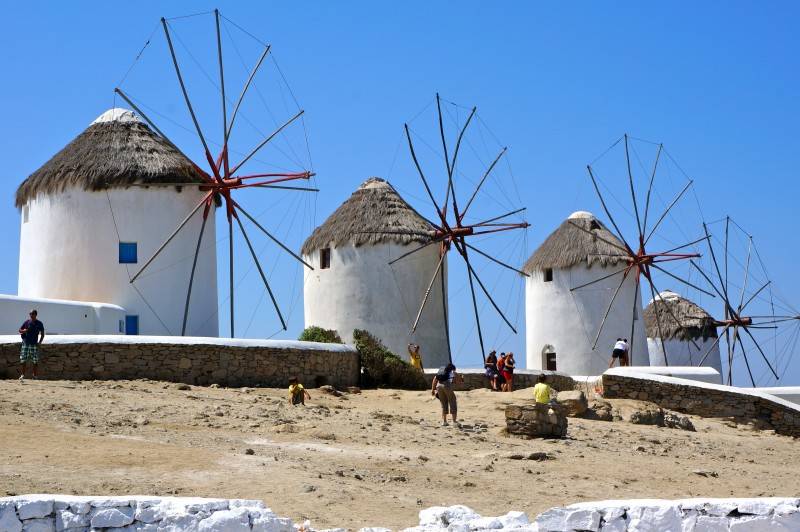 Over the past few weeks my Greek man and I have been on our summer travels, visiting Greek relatives, eating too much meat and ice cream (not together), and illegally throwing toilet paper down the loo (something that is not allowed in Greece or Cyprus due to their pre-historic sewage system).

On the first part of our hols we soaked up the sun in Mykonos, a popular Greek island destination which makes up part of the Cyclades, lying between Tinos, Syros, Paros and Naxos (don’t get confused-os).

In Greek mythology Mykonos was the location of the battle between Zeus and the Titans, and the island was named in honour of Mykons, son of Anios who was a son of Apollo and nymph named Rio. (You never know when you might need this information!).

We stayed at the beautiful Petinos Beach Hotel which sits right on the golden beach of Platis Gialos, a superb location with easy access to the whole island – a bus stop and boat stop can be found right outside the hotel.

The view from our balcony

Blogging on the balcony

Mykonos is famed as a cosmopolitan destination amongst the Greek islands and widely recognised as one of the great party meccas, with exquisite fine-sand beaches and clear blue-green waters. I had been warned that Mykonos is generally known as…well…a very male-friendly place, but that still didn’t prepare me for the extremely high level of testosterone wafting around the island.

On our first day we visited Super Paradise Beach. Personally, I think the word Paradise should be taken out and replaced with a different word, because never have I seen so many gay, nude bodybuilders all in one place. The right side of the beach is known to be the nudist part, for men and women, although I am quite certain that the number of male bits on show far outweighed the female bits.

The outrageously camp Jackie O Bar sits on top of the beach with a stairwell snaking up the side, just below the famous church of Paraportiani. Passing a nude jewellery seller on the way (with just a hand-designed, circular medallion tied onto a piece of string around her waist to cover her modesty), we made our way halfway up to the bar and promptly decided to run straight back down again after I realised that there were absolutely no women in the vicinity, and several hungry eyes were beginning to ravish my Greek man.

A piece of paradise

Check out the dude in green

Can you see the nudists?

Around the corner, Paradise Beach offers a similar party atmosphere to Super Paradise, but with less nudity. The music starts thumping at around 4pm with scantily clad men and women dancing on tables and generally living it large.

The most upmarket beach, Psarou, was near our hotel. Widely recognised as a celebrity hotspot, it was reported that one Arab billionaire purchased a £120,000 bottle of champagne, simply to spray over his feet. Apparently they were a bit hot.

The level of pretention here was quite evident, with the middle of the beach decked out with the most expensive-looking sunbeds I have ever seen, all reserved of course. When my husband attempted to ask how much the sunbeds were he was dismissed with a wave of a hand and told that “they are not for you.” I was tempted to stride up to the git myself and tell him exactly where he could shove his sunbed, but we managed to find some almost equally-expensive looking chairs on the other side of the beach.

Check out the sunlounger!

View from the top

The highlight of our daily beach visits was when my husband was accosted by Dsquared designers Dean and Dan Caten, who apparently are regulars to the island.

When I say accosted, what actually happened was that we were parading up and down the beach (that’s how you get the best tan), and had to tiptoe around Dean and Dan who were lounging right at the front of the beach, sunbeds almost in the water. As I walked by I noticed Dean (or was it Dan?) staring at someone behind me, and suddenly heard them drawl, “Hey man, great shorts.”

I looked around to see my Greek man (proudly wearing his DSquared swim shorts) grinning like a Cheshire cat and giving the guys a thumbs up sign. Later he lamented that he had not stopped to chat further with the two D’s who clearly wanted to know a bit more about his choice of swimwear.

If you are not a beach person (then why the hell are you on a Greek island?!), Mykonos still has plenty to offer with several historical attractions as well as the main town.

Each night, we took the short bus ride to the town and spent our evenings drooling over the exquisite handmade goods in the boutique and designer shops, and trying desperately to find our way through the labyrinth of tiny cobbled streets.

The labyrinth of lanes

In the western part of the town sit one of the most recognised landmarks of Mykonos – the 16th century windmills. From here you can walk down the stairs to Little Venice (Alefkandra), a district located right by the sea, where you can enjoy a very expensive cocktail and watch the breath-taking sunset.

Enjoying a cocktail at Little Venice

The island is dotted with small white churches everywhere you go and there are several museums for the more cultured traveller.

Unfortunately we spent so much time getting lost in the town and greedily over-indulging in eating, shopping and sun worshipping that we didn’t have time to visit every attraction, although we explored as much as we could. We even took a boat trip around the entire island, complete with a barbeque lunch and a dip in a secluded beach.

Mini monasteries on the beach

At Nikos Fish Taverna in the town

On a fun boat trip

Beauty in the town

An array of colour

The island itself is quite dry and devoid of any greenery, which makes it not as pretty as other Greek islands I have visited such as Skiathos, Skopolos and Cephalonia. However the advantage to a dry island is that nasty little wasps and flies are rarely seen and for once I was able to enjoy a holiday without gassing myself with insect-repellent!

So if you are looking for a beautiful beach-break filled with muscular men in tight shorts, and don’t mind spending hours trying to find your way out of an intricate maze of cobbled streets, then Mykonos is definitely for you.

P.S. We even got a mention on the frescobol racquet website TRIBEWOOD!