In a nutshell, the GWC aim to educate, empower and inspire women teetering on the edge of Mount Olympus by providing information on Greek marriage, traditions, language and much more. You don’t have to be Greek to join in but you do need to have a sense of humour!

In 2012, The Greek Wives Club was founded by writer and author Ekaterina Botziou, after she herself married into a Greek Cypriot family and published her first book Greek Expectations: The Last Moussaka Standing.

Inspired and frustrated by the madness of her own Big Fat semi-Greek life, Ekaterina decided to chronicle her Hellenic dramas and set up a lifestyle blog Ekaterina’s Greek Expectations.

Encouraged by the reader response, Ekaterina went on to establish Facebook group The Greek Wives Club which later turned into a website and has since merged with her main blog.

The concept of the group was based on one of Ekaterina’s favourite comedies, The First Wives Club and the idea was to create a space for women to meet and post comical stories about their lives. The initiative soon grew into something of a community network about living with cultural differences, about family support and comical themes about life. It was also meant to act as another platform for Ekaterina’s blog and short stories; but she began using it to promote other bloggers and authors who wrote about relevant themes.

After folk expressed a desire for merchandise with the club logo on it, Ekaterina set up The Greek Wives Club store  and designed a range of products including aprons, mugs, notebooks, T‐shirts and other accessories all adorned with the club’s logo and quotes from Ekaterina’s daily‐in‐the‐life Greek adventures. 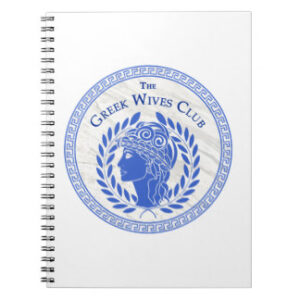 Check out our FAQ page to find out more!

Connect with the GWC