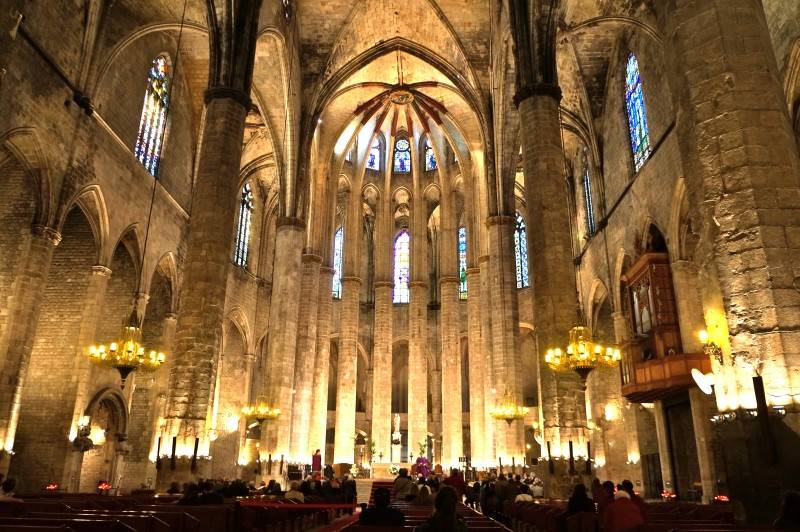 Ola! So I am now well and truly on the wrong side of 25. After spending last year’s birthday smashing plates and ignoring talk of Greek babies (read my 26th birthday post here), this year I decided to restrain myself and organised a mature, sight-seeing trip to Barcelona to celebrate my 27th.

After being told by everyone who had ever been to Barcelona to WATCH OUT FOR PICKPOCKETS, I’ll admit I was a little jumpy upon arrival and made a point of holding my bag so tightly that I ended up with grooves in my hands.

The weather was lovely, not too hot, not too cold, perfect for sight-seeing – of which we did plenty.

We stayed at the H10 Universitat Hotel in Las Ramblas, the heart of the city – apparently the place to be, or the place not to be depending on what you want out of your break. Usually I make a point of not staying in city centres, preferring to be on the calmer outskirts, but seeing as this was a short ‘city’ break, it made sense to be near all the action.

Described as a tree lined pedestrian mall, La Rambla street stretches for 1.2 kilometres connecting Plaza Catalunya with the Christopher Columbus Monument at Port Vell. Considered to be the main tourist area due to its proximity to the Gothic neighbourhood and other places of interest, Las Ramblas was of course crowded and noisy – with attractions similar to those found in Covent Garden, including a huge covered food market with the most diverse range of fruit I have ever seen.

There are various modes of transport including a metro and Boris-style bicycles and of course you can walk, although prepare to be surprised at how long it takes you to get around. We took the official sightseeing bus tour – the Barcelona Bus Turistic – around the city, which proved an excellent way to see all the sites and hop on and off whenever we wanted. We bought a two day ticket and explored both the red and green lines which took us all over the east and west areas. Each round trip takes about 2 hours.

Barcelona is famed for its architecture and art which won the city the 1999 RIBA Royal Gold Medal. Many of the buildings in the Barri Gotic centre date from Medieval times, in particular the work of Antoni Gaudi, which can be seen throughout the city. His best-known work is the still unfinished church of the Sagrada Familia, which has been under construction since 1882. Personally I felt that at 20 euro EACH, the entrance fee was rather high and while I was in no doubt that the church was a magnificent piece of art, I preferred the Barcelona Cathedral of the Holy Cross and Saint Eulalia – I felt a sense of peace and calm there that wasn’t present at Sagrada Familia.

We also visited Parc Guell, Casa Batllo, La Predrera, the Olympic Stadium, Port Vell, Roca Village (shopping outlet outside of Barcelona) and some of the museums as well as the Barcelona Zoo which proved to be a highlight of the holiday.

Lions and tigers and bears oh my!

The vast Marina Port Vell is a focal point of the city for tourists and locals alike and I was nearly run over by the huge number of skateboarders, roller-bladers and cyclists who take advantage of the wide promenade along the water front. It was too cold to take a dip and to be honest I would not have been comfortable leaving my stuff (even just a towel) on the beach with the large crowds swarming around. The beach is apparently a haven for pickpockets and there were indeed a lot of ‘dodgy’ looking characters around. The port also contains a mall, an IMAX cinema and an aquarium as well as bars and restaurants.

View from the mall

Barcelona Fish Sculpture in the background

Can you spot us?

Now to the important part of any holiday: FOOD. As everybody knows, when you stay in a particularly touristy area, you will be charged tourist prices. However, the food should still be good quality. Sadly we did not find that this was the case. I am sure that somewhere there were some very nice restaurants and we did our best to explore side streets and places where the locals went, trying tapas after tapas. But in the end, we found ourselves at The Quick Greek.

Eating a portion of chorizo…

Barcelona is a great place to visit for two or three days if you are looking for some quirky art and historical architecture mixed with a spot of night life and a sea breeze. And I have to say it was nice to go somewhere where I could actually hear the language of the locals and traditions hadn’t been swept aside by the influx of other nations. So all in all, a nice birthday break.