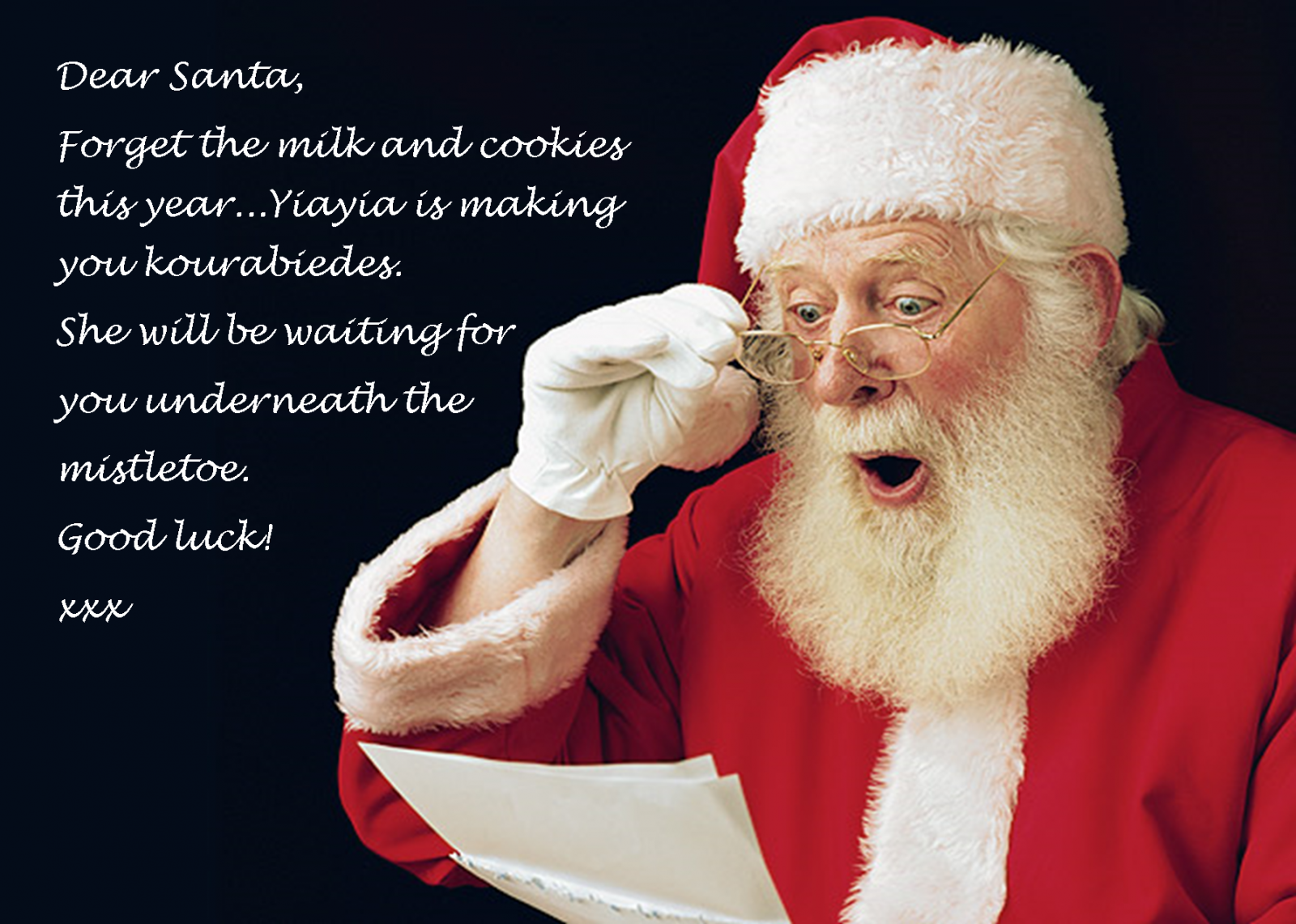 I just wanted to write a quick blogmas post today to address the topic of the big guy in red. No I’m not talking about Papou in his festive pyjamas, I’m talking about SANTA CLAUS!

I had a magical childhood and Christmas is at the forefront of my most magical memories. Each December (actually probably starting from October), my siblings and I would spend hours plotting how to catch sight of the real Father Christmas, drawing up detailed plans and instructing our mum and dad to alert us immediately if they heard the sound of sleigh bells… (alright I confess we are already working on this years biggest Santa kidnap plot yet…!)

There was never that one moment when I stopped believing. My parents didn’t sit me down one day and admit that they’d been lying all along. In fact I still believe. Only, as I got older I just quietly accepted that perhaps it wasn’t quite plausible that one guy can deliver all the presents to the whole world in one night and I moved on. (The Easter bunny however is an entirely different matter, along with the tooth fairy!)

It really saddens me when I hear young children telling other children that Santa doesn’t exist and making fun of their beliefs. And it’s not because that child is more mature or has caught their mum strategically placing a gift in the fireplace, it’s usually because the parents have helpfully told their child that he doesn’t exist. In fact I remember one of my secondary school teachers having a good old laugh at the fact that some of us might still believe.

Well I’m sorry but what’s wrong with still believing in the magic of Christmas at the age of eleven? (Or even older!) The last time I checked, eleven still qualified as child age. In a world where kids are growing up too fast, why can’t we let them be children? It doesn’t mean that they are immature, not academic or completely un street-wise – just that they still have some innocence and are holding on to the idea that someone in the world is spreading joy. Yet we want to rip that away. WHY??!!

Just let them grow out of it in their own time!

And I do not understand people who say that they don’t want to lie to their children. In actual fact, the history of the man with the beard is grounded in truth. The historical St. Nicholas was the revered Bishop of Myra, who had a reputation for secret gift-giving, such as putting coins in the shoes of those who left them out for him, a practice celebrated on his feast day―St Nicholas Day (6 December, Gregorian calendar, in Western Christianity and 19 December, Julian calendar, in Eastern Christianity). Traditionally depicted wearing a red bishop’s cloak, sometimes he would even leave coins in exchange for carrots and hay for his horses. He thus became the model for Santa Claus and was dedicated to helping the poor throughout his life.

So what exactly are we lying about? Shattering the magical dreams of little children is arguably far more detrimental than just letting them believe in the spirit of Christmas. Destroying that innocence is basically teaching them that hope, magic and good don’t exist.

In my opinion, EVERY child should believe in Santa. It’s a fundamental part of childhood and an important part of a child’s creative development.

So don’t put away the milk and cookies just yet. Listen out for those sleigh bells and don’t forget to leave carrots for the reindeer, because Santa Claus is DEFINITELY coming to town…