Not sure what to get your Greek man this Christmas? Thinking a back wax voucher will suffice? Or maybe even some Grecian 2000? STOP. RE-THINK. THIS IS A GREEK MAN WE ARE TALKING ABOUT. So only a MECENDES will do.

Pronounced ‘Mecendes’ (for no reason whatsoever), this particular make of car represents more than just status, wealth and class for the Greeks. It represents actually BEING GREEK.

If the Merc had a voice you just know that it would be yelling, “ELLA!!! I TAKE YOU FOR NICE RIDE SOME PLACE WHERE YIAYIA DON’T SEE US!”

In Greece and Cyprus, even the taxis are Mercs.

No-one comes between a Greek man and his car. When a Greek boy buys his first Merc, this cements his status as a man and from that day forth no woman will ever come close to the intense feelings of love that he has for his auto-mistress.

My father-in-law bought his first Mecendes waaaay back in 1979. The orange W116 S-Class Mercedes is one of a kind – a true Greek gem of an automobile complete with no seatbelts, no airbag and the best anti-theft device known to the Mediterranean man: a cross dangling menacingly from the mirror.

The car has seen over three decades of adventure. My husband often dreamily recalls his adolescent summers spent in Cyprus when he would hurtle down the Dekhelia road on his way to Ayia Napa, Greek music blaring out the window, without a care in the world.

At 37 years old, the beloved automobile has naturally had a few setbacks. But thanks to the frustratingly slow efforts of backstreet Cypriot car engineers, the batmobile has been brought back to life several times and even managed to escort my Greek man to the church on our wedding day – although it broke down just as they arrived. (The Merc, not my hubby. He may well have been breaking down but I didn’t see any visible signs of distress until after the ceremony…).

A couple of years ago my father-in-law’s brother decided that he too wanted a piece of the vintage Merc action and bagged himself EXACTLY THE SAME ONE.

In a slightly different shade.

Funnily enough the man he bought it from purchased the car at the same time as my father-in-law who, it turns out, remembered him from years ago.

Previously, it was only the orange Merc that turned heads as we drove down Finikoudes. Now every time we go out as a family in matching cars, it’s like The Godfather meets The Fast and the Furious.  Greeks and tourists alike stop to take pictures and ask if they can have a ride. I’ve literally had to push past gathering crowds just to get in! My father-in-law loves it. He and his brother have even started wearing matching Mafia hats.

We are known all over Cyprus as the classic Merc family. Or as the ‘You have the big orange car yes?!‘ family. 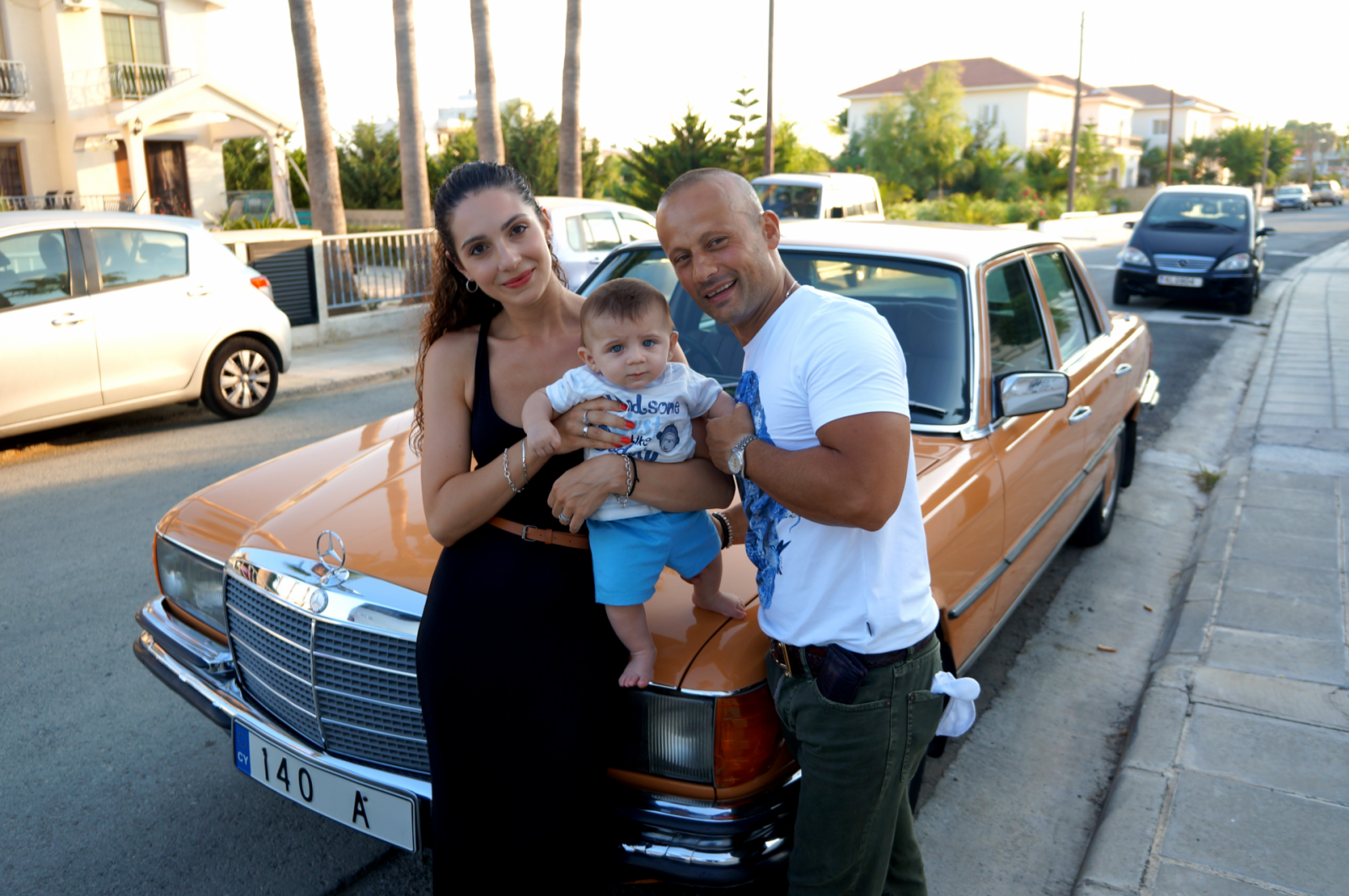 Now passed to my son, no doubt the orange Merc still has a few more adventures ahead. (Although the thought fills me with fear!)

Don’t think for a minute that fobbing your Greek man off with a race day at the Ferrari track will do. It simply won’t. Or else you might find him cradled in a corner softly singing to himself: