Graffiti is viewed by many as a destructive art form, favoured by yobs with nothing better to do than ruin a beautifully painted wall, statue or building with a spray can. However, some grafitti can reveal much about what is going on in the world and represent hidden meanings, emotions and feelings. Today’s blog post is a fascinating article written by author Jeremy Hinchliff, about the meaning behind the graffiti in Kalamata, the second most populous city of the Peloponnese peninsula in southern Greece.

Jeremy published his first novel, DEAD OLIVES, an exotic, sun-drenched thriller set in Greece during the economic crisis, this year and he is sure to be one to watch out for on the literary scene. You can follow Jeremy on twitter @HinchJeremy. Thank you Jeremy for kindly sharing your article with us!

Graffiti stories in the city of Kalamáta

Until the recent clean up there was a stencilled graffiti rat on the fountain in the main square. Not part of the original design. The rat had two or three incarnations on the low wall where children play in the afternoons. It was painted on many buildings too. On a rain-soaked evening you felt permanently accompanied by it walking north from the centre of town.

The route is under generous overhangs on the plush west side of Aristomenous. On the east side the buildings are often derelict, crumbling, never repaired after earthquakes in the 1980s. The shutters are rusted or deep in graffiti. Beggars take up positions there.

I came to Greece in 2013 to write about the Crisis. Reading the graffiti it seemed to me a novel would be pointless unless it had characters who would write what was on the walls.

According to Pétros Pantazόpoulou[1]the origin of the city’s name also lies in graffiti. But that was long ago. He says Kalamáta should be read backwards –ATA MALAK – to reveal the Hebrew words which he thinks comprise it. They mean bad angel, or basically, devil. In Pantazόpoulou’s theory this was once painted on a wall by a medieval Jew. Hebrew was written in the Greek alphabet by this man’s community but still read from right to left. The huge lettering ATA MALAK (I transpose it back to front here) warned other Jews to expect bad treatment. The words, read left to right, were gradually taken up as the place name. Greeks residents did not realise there was a hidden insult.

“Greece for the Greeks” anti-immigrant graffiti

I know nothing about mediaeval Hebrew so I cannot judge the theory. It is certainly more interesting than the guide book views that it comes from Κaλá μátia, beautiful eyes.

The city is a candidate for the 2021 European capital of culture. Much of the most bitter graffiti has been removed but you can find it in back streets. Aside from slogans of football fans events of the Crisis are the most common theme. On the bottom corner of the Cultural Centre there were once the words Mikrόs Aléxis! (Little Alexis).  Little Alexis is invoked on walls in most Greek cities. He was a fifteen year old schoolboy shot dead by a policeman in Athens in 2008. His name has been more or less an anti-governmental rallying cry ever since. It doesn’t really matter which government. Standing up or sucking up to Europe the government usually does the wrong thing. 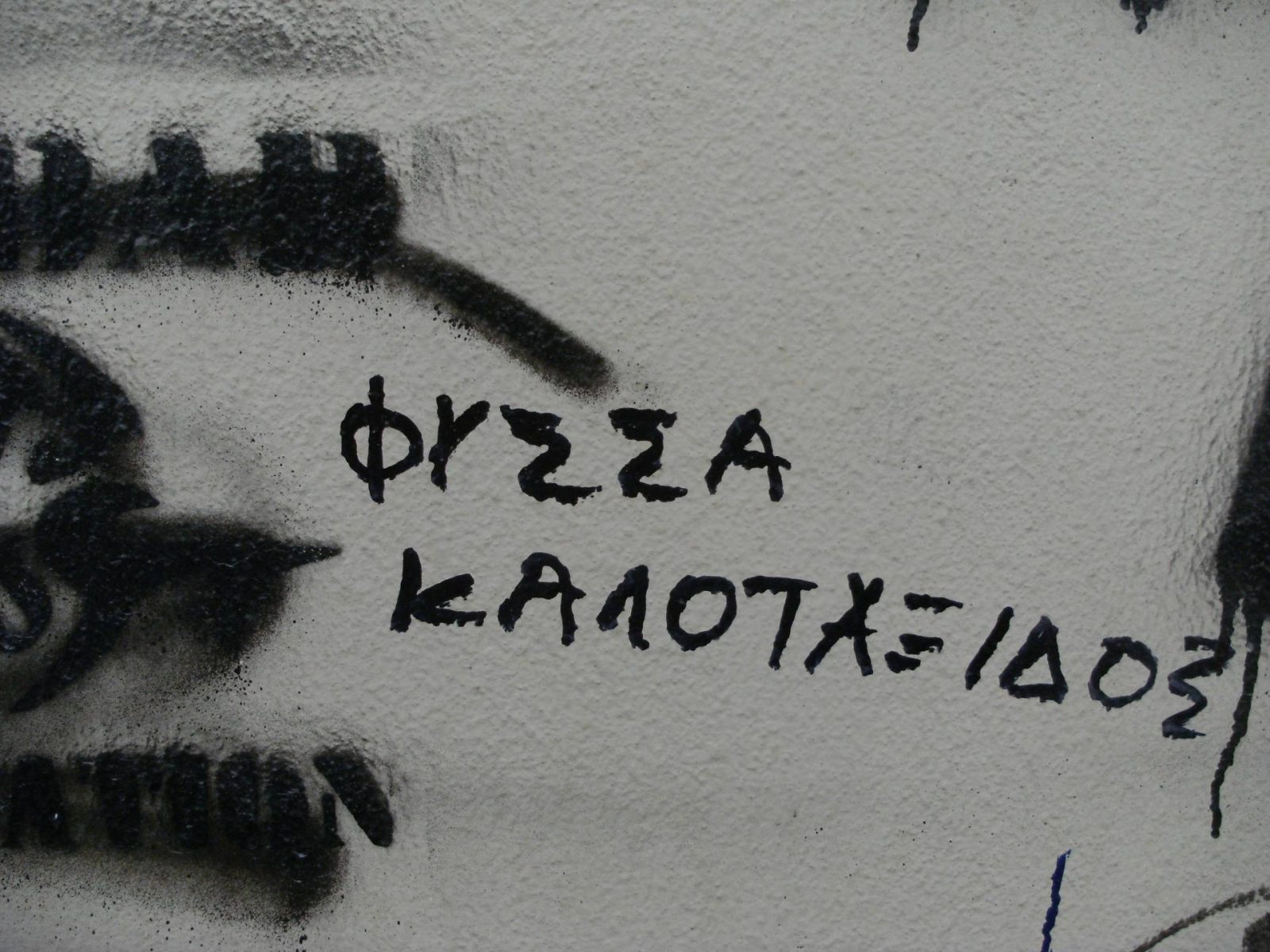 Pávlos Fýssas, an antifascist rapper, was murdered by a member of Golden Dawn in 2013. He is still remembered in the graffiti. Free the heroes of Golden Dawn! was the counter message near the railway park. That has now been painted over. ΕΕ Δολοφόνος – EU murderer! – sometimes seen on signs for EU-funded projects – has also been diplomatically removed.

On the way back I see six Africans selling umbrellas. They’re not really helping themselves. Too many on one street.

A very smart elderly lady asks me for money. She’s too old to have lost her job, but has probably had her pension cut. I can’t imagine anyone like her begging if she were not in deep trouble.

On another, warmer evening Kalamáta is a beautiful place. Shops open late, everyone strolling along in good spirits. I wish it well with its bid to be culture capital.

The last graffiti I see is the rat on one side of a corner house. A graffiti cat is on the other. The rat is not running. It waits for its adversary with a cleaver raised above its head. 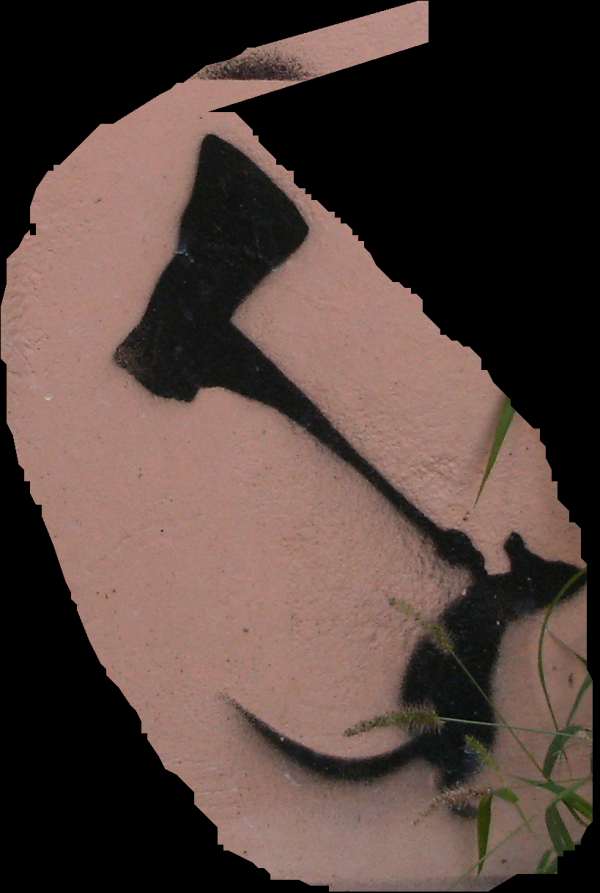