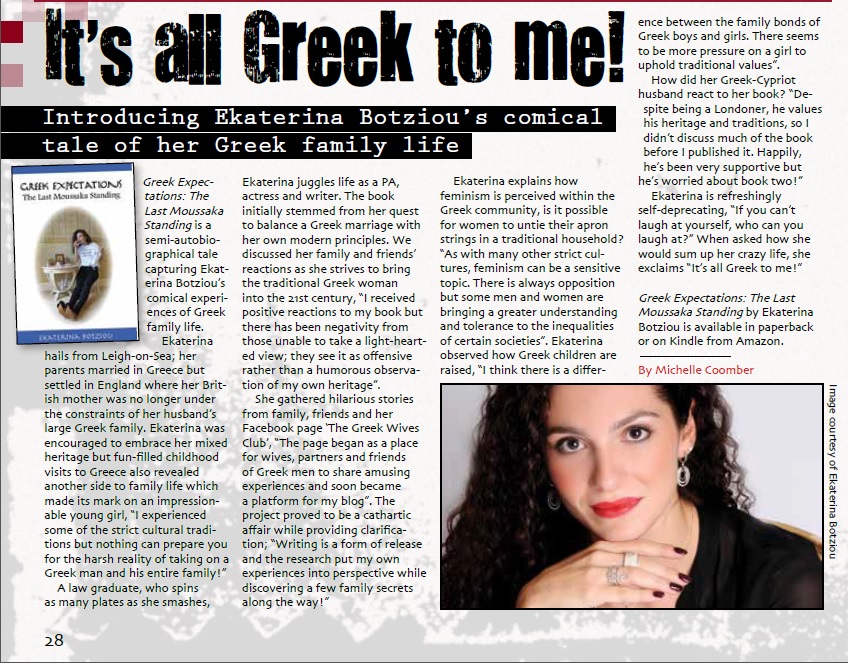 This month I was interviewed by the lovely Michelle Coomber for Southend-on-Sea’s publication Level 4 Magazine, which promotes art, culture and entertainment.

Many thanks to Michelle.

It’s all Greek to me! – Introducing Ekaterina Botziou’s comical tale of her Greek family life

Ekaterina hails from Leigh-on-Sea; her parents  married in Greece but settled in England where her British mother was no longer under the constraints of her husband’s large Greek family.

Ekaterina was encouraged to embrace her mixed heritage but fun-filled childhood visits to Greece also revealed another side to family life which made its mark on an impressionable  young girl, “I experienced some of the strict cultural traditions but nothing can prepare you  for the harsh reality of taking on a  Greek man and his entire family!”

A law graduate, who spins as many plates as she smashes, Ekaterina juggles life as a PA, actress and writer. The book initially stemmed from her quest to balance a Greek marriage with her own modern principles. We discussed her family and friends’ reactions as she strives to bring the traditional Greek woman into the 21st century, “I received positive reactions to my book but there has been some negativity from those unable to take a light-hearted view; they see it as offensive rather than a humorous observation of my own heritage”.

She gathered hilarious stories from family, friends and her Facebook page ‘The Greek Wives Club’, “The page began as a place for wives, partners and friends of Greek men to share amusing experiences and soon became a platform for my blog”. The project proved to be a cathartic affair while providing clarification; “Writing is a form of release and the research put my own experiences into perspective while discovering a few family secrets along the way!”

Ekaterina explains how feminism is perceived within the Greek community, is it possible for women to untie their apron strings in a traditional household?  “As with many other strict cultures, feminism can be a sensitive topic. There is always opposition but some men and women are bringing a greater understanding and tolerance to the inequalities of certain societies”.

Ekaterina observed how Greek children are raised, “I think there is a difference between the family bonds of Greek boys and girls. There seems to be more pressure on a girl to uphold traditional values”.

How did her Greek-Cypriot husband react to her book? “Despite being a Londoner, he values his heritage and traditions, so I didn’t discuss much of the book before I published it. Happily, he’s been very supportive but he’s worried about book two!”

Ekaterina is refreshingly self-deprecating, “If you can’t laugh at yourself, who can you laugh at?” When asked how she would sum up her crazy life, she exclaims “It’s all Greek to me!”

Greek Expectations: The Last Moussaka Standing by Ekaterina Botziou is available in paperback or on Kindle from Amazon.