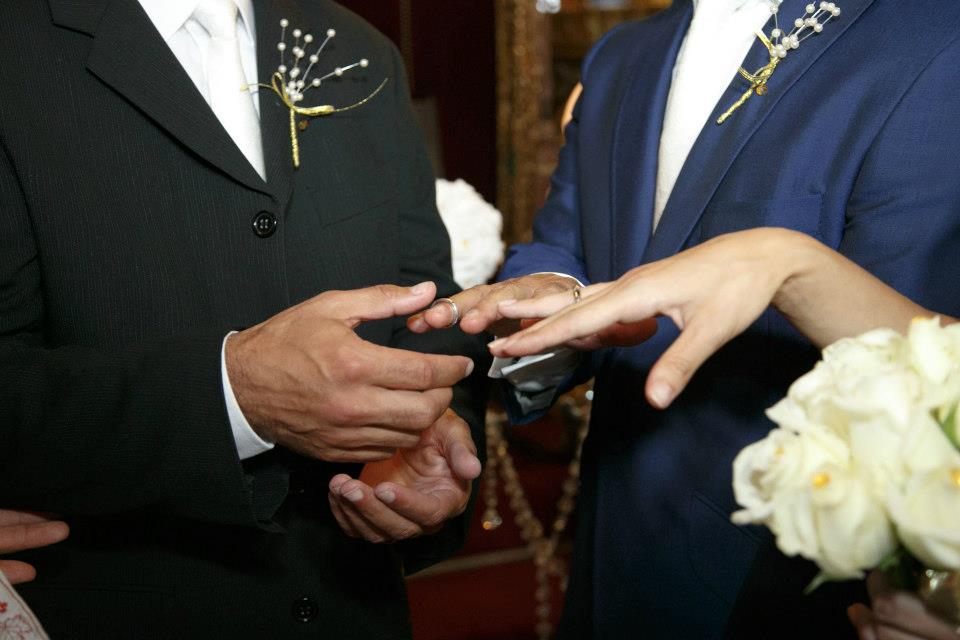 Greeks LOVE to talk. There is absolutely no denying it. Tell one person a story on Monday morning and you can guarantee that by Tuesday morning the whole village will know your business, although of course the story will now have several variations, having gained momentum and various fictitious ‘facts’ along the Greek grapevine.

Some of my extended family are of the belief that in order for a Greek marriage to be viewed as legal in the UK, you must get married in a registry office BEFORE you get married in the Greek church.

My parents got married in Greece, almost 30 years ago. They married in a Greek Orthodox ceremony in a respected LEGAL Greek church, with all the various LEGAL documentation. My mother changed her surname on her British passport with the aid of her Greek marriage certificate and so far immigration services have not turned up on our doorstep threatening to take my father away over a bogus marriage.

Yet, when my Greek Cypriot husband and I were planning our wedding, I was bombarded by people claiming that we had to get married first of all in a registry office in the UK before we got married in Cyprus, so that the marriage was valid.

Well this was the first I had heard of it.

I was then told that my parent’s marriage was not valid as back then Greece was not even in the EU.

I of course spoke to various authorities on the matter including the BIG GREEK PRIEST in London who informed me that although some Cypriots do get married twice, it is absolutely not necessary.

Yet this has still not appeased some and I keep hearing this Urban Myth that if you get married abroad/in a foreign church, you must have a registry office ceremony to legalise the marriage in the UK.

This is NOT TRUE people!

According to British law, if your marriage was legally conducted in a country (that is on the list below) and is legal according to those laws, AND would have been legal if you had got married in the UK, (i.e. you haven’t tried to marry your brother/sister/aunt or are trying your hand at bigamy etc) then it is also legal in the UK and there is no need to do anything.

You not only do not need to register your overseas marriage in the UK, you cannot do so. There is no need to, it is fully recognised for all legal purposes and will be treated no differently from one issued within the UK.

Also, if this myth were true, then every person who had ever married in a foreign country and then chose to live in the UK, would be viewed as not married…which is ludicrous!

So if you want to get married BEFORE you get married then by all means do. But if you don’t then don’t worry, Zeus will NOT come crashing down out of the skies and declare you and your spouse FRAUDSTERS.

If you would like more information on getting married abroad (in any country) then take a look at this article by Sainsbury’s Bank.

Hope that helps everyone!

P.S. Coca cola WILL NOT dissolve a tooth (or a nail, or a penny, or a piece of meat) overnight.