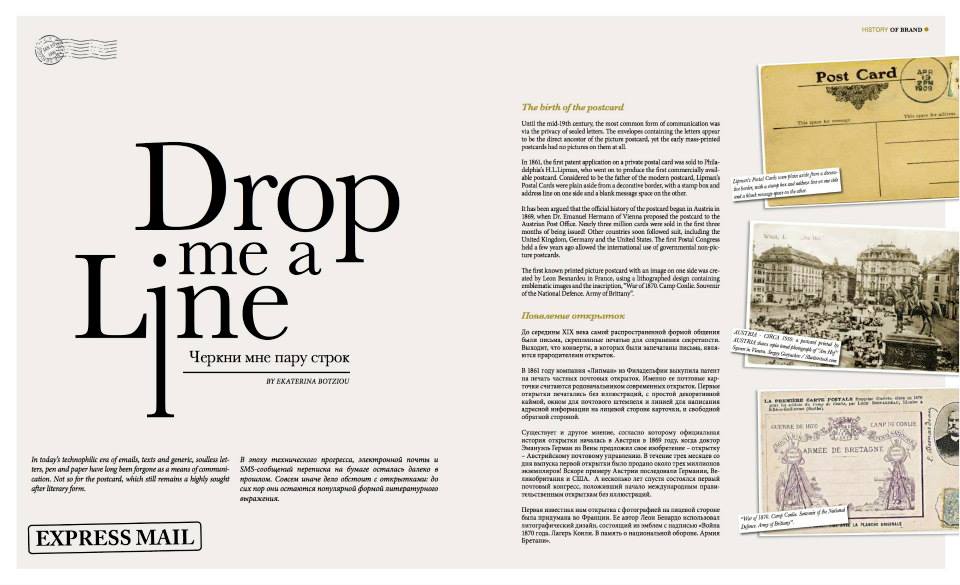 I love receiving holiday postcards from friends and family. It’s so much nicer than a boring email and so much more real – it’s something that you can physically put away in a box and look back on rather than trawling through the internet.

But how did the postcard phenomenon all start? I answer that question in the 11th issue of STATUS magazine featuring my article:

DROP ME A LINE: THE HISTORY OF THE POSTCARD

In today’s technophilic era of emails, texts and generic, soulless letters, pen and paper have long been forgone as a means of communication. Not so for the postcard, which still remains a highly sought after literary form.

Until the mid-19th century, the most common form of communication was via the privacy of sealed letters. The envelopes containing the letters appear to be the direct ancestor of the picture postcard, yet the early mass-printed postcards had no pictures on them at all.

In 1861, the first patent application on a private postal card was sold to Philadelphia’s H.L.Lipman, who went on to produce the first commercially available postcard. Considered to be the father of the modern postcard, Lipman’s Postal Cards were plain aside from a decorative border, with a stamp box and address line on one side and a blank message space on the other.

It has been argued that the official history of the postcard began in Austria in 1869, when Dr Emanuel Hermann of Vienna proposed the postcard to the Austrian Post Office. Nearly 3 million cards were sold in the first 3 months of being issued, and other countries soon followed suit, Germany and the United Kingdom in 1870, and the United States in 1872. In 1875 the Pioneer era truly began with the first Postal Congress allowing the international use of governmental non-picture postcards.

In 1870, the first known printed picture postcard with an image on one side was created by Leon Besnardeu in France, using a lithographed design containing emblematic images and the inscription, “War of 1870. Camp Conlie. Souvenir of the National Defence. Army of Brittany”.

The first printed advertising card appeared in 1872 in Great Britain and was followed by the first German card in 1874. In British India, the introduction of this cheap method of communication in 1879 resulted in unprecedented postal access. During the 1880s, cards depicting images such as the Eiffel Tower in 1889, gave impetus to the picture postcard golden era of the mid 1890s, and the souvenir postal card was born.

In 1894 Britain’s Royal Mail finally gave publishers permission to manufacture and distribute picture postcards. Coupled with the industrial revolution and the onset of fast and affordable travel, this caused a boom in the souvenir industry of popular seaside tourist destinations. Scarborough was awarded the honour of being the first town immortalised on a postcard, and pictures of landmarks, scenic views and drawings of celebrities soon followed.

By the Edwardian era, postcards had become a phenomenon with increasingly intricate designs and elaborate drawings. However, the soaring success was not to last, and the advent of the First World War caused a swift decline in the cards imported from Germany, killing the American postcard hobby and paving the way for the telephone as the quickest means of communication.

In the aftermath of World War One, a return to political normalcy heralded a decade of increased consumer spending and economic growth. In opposition to the mood of the spectre of the previous years, humour became a key feature of British postcards in particular, and bawdy, cartoon-style saucy postcards which made use of innuendo and double entendres became widespread. At the same time there emerged a style of highly colourised and lushly romantic Art Deco postcards, which featured anonymous models in contrast to the famous celebrities featured on earlier cards.

By the 1930s the sale of naughty postcards had reached a colossal 16 million a year. In 1954 the newly elected Conservative government grew concerned at the apparent deterioration of British morals and prosecuted several postcard artists for obscenity.

The liberal attitude of the Swinging Sixties helped to revive the British saucy postcard, and they remain a permanent fixture of specialist souvenir shops and modern seaside resorts. European postcards have since added their own, often rather graphic twist to the cheeky theme, abandoning the quaint British innuendos in favour of exotic brazen nudes and images bordering on the pornographic.

Original postcards are still highly sought after, and over the years deltiology – the practice of collecting and dating rare and unusual postcards – has become the third largest hobby in the world.

Since their emergence over 150 years ago, the most serious threat posed to postcards has been from the digital demons of the new millennia. Yet, far from eliminating sales, the introduction of electronic communication tools has largely influenced the sending of postcards, and publishers continue to profit from the various forms of advertising that the postcard offers.

Despite the decline of the written form, it seems that the postcard will forever hold a place in the world’s literary heritage.