We may have skipped November but welcome to December/January’s Book Club! This time I have rounded up a list of 12 books that I thought could make up our 2022 reading list. One book a month can be a stretch when you’re very busy but this year I’m going to really push myself! I have not read any of these on the list so if anyone has, please do comment and let us know if you liked it! I’ve included comedy, romance, horror, thriller and of course a bit of Greek Mythology. Here we go:

An era-defining novel about the relationship between a fifteen-year-old girl and her teacher. Vanessa is now thirty-two and in the storm of allegations against powerful men in 2017, the teacher, Jacob Strane, has just been accused of sexual abuse by another former student. Vanessa is horrified by this news, because she is quite certain that the relationship she had with Strane wasn’t abuse. It was love. She’s sure of that. Forced to rethink her past, to revisit everything that happened, Vanessa has to redefine the great love story of her life – her great sexual awakening – as rape. Now she must deal with the possibility that she might be a victim, and just one of many.

Nuanced, uncomfortable, bold and powerful, My Dark Vanessa goes straight to the heart of some of the most complex issues of our age.

Ravaged and sore from giving birth to her first child, Megan is mostly raising her newborn alone while her husband travels for work. Physically exhausted and mentally drained, she’s also wracked with guilt over her unfinished dissertation–a thesis on mid-century children’s literature.

Enter a new upstairs neighbor: the ghost of quixotic children’s book writer Margaret Wise Brown–author of the beloved classic Goodnight Moon–whose existence no one else will acknowledge. It seems Margaret has unfinished business with her former lover, the once-famous socialite and actress Michael Strange, and is determined to draw Megan into the fray. As Michael joins the haunting, Megan finds herself caught in the wake of a supernatural power struggle–and until she can find a way to quiet these spirits, she and her newborn daughter are in terrible danger.

Hidden in the depths of eighteenth-century London, a secret apothecary shop caters to an unusual kind of clientele. Women across the city whisper of a mysterious figure named Nella who sells well-disguised poisons to use against the oppressive men in their lives. But the apothecary’s fate is jeopardized when her newest patron, a precocious twelve-year-old, makes a fatal mistake, sparking a string of consequences that echo through the centuries.

Meanwhile in present-day London, aspiring historian Caroline Parcewell spends her tenth wedding anniversary alone, running from her own demons. When she stumbles upon a clue to the unsolved apothecary murders that haunted London two hundred years ago, her life collides with the apothecary’s in a stunning twist of fate—and not everyone will survive.

Fern Castle works in her local library. She has dinner with her twin sister Rose three nights a week. And she avoids crowds, bright lights and loud noises as much as possible. Fern has a carefully structured life and disrupting her routine can be . . . dangerous.

When Rose discovers that she cannot fall pregnant, Fern sees her chance to pay her sister back for everything Rose has done for her. Fern can have a baby for Rose. She just needs to find a father. Simple.

Fern’s mission will shake the foundations of the life she has carefully built for herself and stir up dark secrets that she long thought were buried.

Laura has spent most of her life being judged. She’s seen as hot-tempered, troubled, a loner. Some even call her dangerous. Miriam knows that just because Laura is witnessed leaving the scene of a horrific murder with blood on her clothes, that doesn’t mean she’s a killer.

Bitter experience has taught her how easy it is to get caught in the wrong place at the wrong time. Carla is reeling from the brutal murder of her nephew. She trusts no one: good people are capable of terrible deeds.

But how far will she go to find peace? Innocent or guilty, everyone is damaged. Some are damaged enough to kill.

In a large house in London’s fashionable Chelsea, a baby is awake in her cot. Well-fed and cared for, she is happily waiting for someone to pick her up. In the kitchen lie three decomposing corpses. Close to them is a hastily scrawled note.

They’ve been dead for several days.

Who has been looking after the baby? And where did they go?

A house with the darkest of secrets.

For Rev Jack Brooks and teenage daughter Flo it’s supposed to be a fresh start. New job, new home. But, as Jack knows, the past isn’t easily forgotten. And in a close-knit community where the residents seem as proud as they are haunted by Chapel Croft’s history, Jack must tread carefully. Ancient superstitions as well as a mistrust of outsiders will be hard to overcome. Yet right away Jack has more frightening concerns.

Why is Flo plagued by visions of burning girls? Who’s sending them sinister, threatening messages? And why did no one mention that the last vicar killed himself? Chapel Croft’s secrets lie deep and dark as the tomb.

Jack wouldn’t touch them if not for Flo – anything to protect Flo.

Jocelyn loves her nanny more than her own mother – until the night that the nanny disappears. Jo is seven years old when it happens and never gets over the loss.

Now, thirty years later, Jo is returning to her family home with her daughter in tow – just as human remains are pulled out of the house’s lake.

Then there’s a knock on the door. And a woman claiming to be her nanny stands outside.

Is she who she says she is? Can she be trusted? And what really happened on that fateful night all those years ago?

MORE THAN A WOMAN

A decade ago, Caitlin Moran thought she had it all figured out. Her instant bestseller How to Be a Woman was a game-changing take on feminism, the patriarchy, and the general ‘hoo-ha’ of becoming a woman. Back then, she firmly believed ‘the difficult bit’ was over, and her forties were going to be a doddle.

If only she had known: when middle age arrives, a whole new bunch of tough questions need answering. Why isn’t there such a thing as a ‘Mum Bod’? How did sex get boring? What are men really thinking? Where did all that stuff in the kitchen drawers come from? Can feminists have Botox? Why has wine turned against you? Has feminism gone too far? And, as always, WHO’S LOOKING AFTER THE CHILDREN? 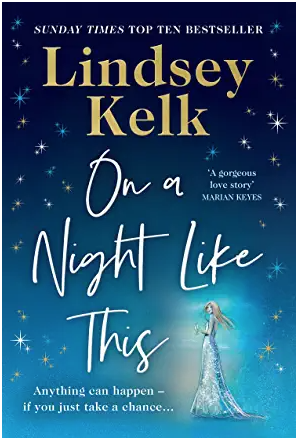 Within days of wishing she could change her life, Fran Cooper is acting assistant to a celebrity, on a yacht in the Mediterranean, and en route to a tiny Italian island and the glittering Crystal Ball, along with the world’s rich and famous.

When she – quite literally – bumps into a handsome American called Evan, a man able to keep his cool in the face of chaos, the magic really begins.

Evan makes her a promise: no last names, no life stories, just one unforgettable night. Yet Evan belongs at the Crystal Ball and Fran is a gatecrasher. They may be soulmates, but their homes are an ocean apart, and their lives a world apart. They’ll never meet again – unless, on a night like this, everything can change forever…

When the results of a DNA test show an unexpected relationship between Claire and Marianne, Claire must confront the darkest secrets of her past and make an impossible choice about the future.

Is Claire’s secret sister the answer to her prayers?

Or will she cost her everything?

As Princesses of Crete and daughters of the fearsome King Minos, Ariadne and her sister Phaedra grow up hearing the hoofbeats and bellows of the Minotaur echo from the Labyrinth beneath the palace. The Minotaur – Minos’s greatest shame and Ariadne’s brother – demands blood every year.

When Theseus, Prince of Athens, arrives in Crete as a sacrifice to the beast, Ariadne falls in love with him. But helping Theseus kill the monster means betraying her family and country, and Ariadne knows only too well that in a world ruled by mercurial gods – drawing their attention can cost you everything.

In a world where women are nothing more than the pawns of powerful men, will Ariadne’s decision to betray Crete for Theseus ensure her happy ending? Or will she find herself sacrificed for her lover’s ambition?