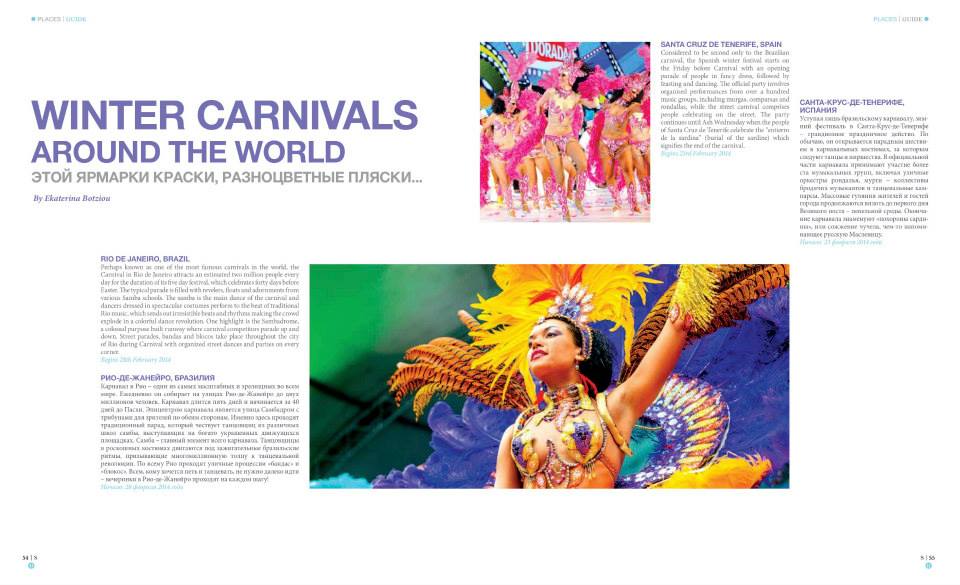 February is Winter Carnival Season! In the 12th issue of STATUS Magazine I wrote a piece about all the various carnivals around the world and what you can expect from them.

So if you are planning a last minute winter getaway and want to get into the carnival spirit, check out my list below!

WINTER CARNIVALS AROUND THE WORLD

Perhaps known as one of the most famous carnivals in the world, the Carnival of Brazil attracts an estimated two million people every day for the duration of its five day festival, which celebrates forty days before Easter. The typical parade is filled with revelers, floats and adornments from various Samba schools. The samba is the main dance of the carnival and dancers dressed in spectacular costumes perform to the beat of traditional Rio music, which sends out irresistible beats and rhythms making the crowd explode in a colorful dance revolution. One highlight is the Sambadrome, a colossal purpose built runway where carnival competitors parade up and down. Street parades, bandas and blocos take place throughout the city of Rio during Carnival with organized street dances and parties on every corner.

Considered to be second only to the Brazilian carnival, the Spanish winter festival starts on the Friday before Carnival with an opening parade of people in fancy dress, followed by feasting and dancing. The festival has two parts: the official carnival and the carnival on the street. The official party involves organised performances from over a hundred music groups, including murgas, comparsas and rondallas, while the street carnival comprises people celebrating on the street. The party continues until Ash Wednesday when the people of Santa Cruz de Tenerife celebrate the “entierro de la sardina” (burial of the sardine) which signifies the end of the carnival.

Tracing their roots back hundreds of years to the festivals in honor of Dionysius, God of Wine, the Limassol Carnival celebrations begin ten days before Lent, with three main parades taking place. Festivities start on the Thursday of Kreatini (meat week) with the entrance of the Carnival King, followed by the Children’s Parade on the Sunday and then the Serenaders’ shows, which involves hundreds of people walking in costume along the town’s longest avenue. The climax of the carnival begins on the following Sunday, known as Tyrini (cheese week), where people consume cheese and dairy products and sing and dance on colorful floats moving along the Makariou III avenue.

The Carnevale di Venezia is an annual festival in Italy, lasting about twenty days which ends with Lent, forty days before Easter on Shrove Tuesday. A central feature of the festival is the masquerade affair, with revelers adorning themselves in elaborate costumes and ornate masks made of leather, porcelain, or glass. A notable design is the Bauta, a heavily gilded mask which covers the entire face and can include an over-prominent nose or chin. Several masked balls and other events are held during the carnival period.

The Quebec Winter Carnival is the world’s biggest winter festival, drawing around 500,000 visitors and lasting for around seventeen days. It is steeped in tradition and events include a winter amusement park, with attractions such as skiing, snow rafting, ice sculptures, snow sled slides and outdoor shows. The most famous attractions are the night-time parades led by Mascot Bonhomme Carnaval, and other events include a masquerade ball at the grand ballroom of the Chateu Frontenac, the Ice Palace opening and closing ceremonies, the free outdoor public banquets, and of course the winter sports.

The first worldwide carnival parade took place in Cologne in 1823. Since then the German festival has drawn in over a million visitors every year. The carnival week lasts around six days and begins on the Thursday before Ash Wednesday with parades being held during the weekend and the main festivities occurring around Rosenmontag (Rose Monday). Traditionally the carnival season is declared open on the 11th November, but festivities begin after the 6th January in the New Year with numerous fancy-dress celebrations and masked balls. Thursday is Women’s Carnival Day, while the onset of the weekend brings parties and dances. Carnival Sunday kicks off with a parade and celebrations reach their zenith with colorful spectacles on Rose Monday. On the last day, Ash Wednesday, a traditional fish dinner is enjoyed by locals to sooth their carnival hangovers.