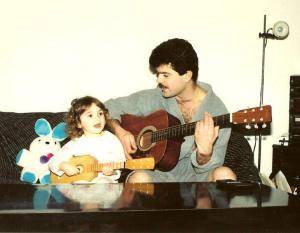 From the catchy laïko-pop tunes of Anna Vissi (Everything I Am), to the electronic harmonies of Vangelis (Chariots of Fire), I have been exposed to all kinds of Greek music since the womb.

The history of Greek music extends far back into Ancient Greece and encompasses different styles and genres, influenced by the Roman Empire, Eastern Europe and the Byzantine Empire.

Central to the sound of Greek music is the Bouzouki, a plucked musical instrument of the lute family, which features heavily in Greek-related images and on the soundtrack to My Big Fat Greek Wedding.

A great music fan, my father introduced me to his love for the bouzouki early on, and was disappointed that I chose to learn to play the violin instead.

Back in the day when cassettes were all the rage, our car was always fully equipped with every Greek mixed tape available. While all the other children would turn up to school accompanied by the latest funky pop, I had to exit the car to the blaring soundtrack of Zorba the Greek.

Despite my early childhood embarrassments, I secretly love Greek music and frequently add to my own collection, the most recent being my father’s own song recording from his heyday which I have finally converted to MPV – check it out on my previous post Dimitrios Botzios sings ‘So Ashamed’.

Back in 2008 I was mesmerised by the beautiful soundtrack to the BBC programme Francesco’s Mediterranean Voyage and finally managed to track down the composer Chris Nicolaides (who turned out to be Greek, obviously) and listen to more of his work. Chris’s latest album, which will include a new live orchestral recording of the Francesco’s Mediterranean Suite as well as music from other BBC’s documentaries, will be commercially available soon.

For Greek people, music (and food) is the key to happiness, and if the likes of One Direction aren’t doing much for you, maybe it’s time to get your Greek on and tune into some Greek sounds.

If you would like to listen to some Greek tracks please click on the THE BEST MUSIC IS GREEK OPA! drop down menu on the right hand side – new tracks are added regularly!