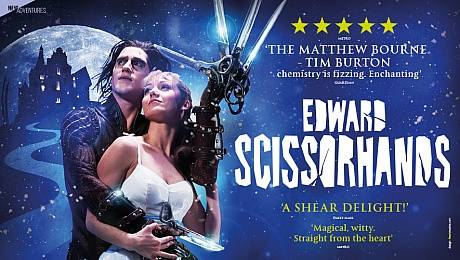 Tim Burton’s Edward Scissorhands, has long been one of my favourite films, and no…not just because of Johnny Depp (although obviously he had a LOT to do with it). Aside from the heart wrenching storyline, Danny Elfman’s beautifully haunting soundtrack captivated me even as a child and I still can’t watch the final scenes of the film without shedding a tear as the music reaches it’s climatic crescendo.

In 2005 Matthew Bourne decided to bring the beauty of the film to the stage in a contemporary dance adaptation told entirely through music and dance. The production received mixed reviews, but went on to tour worldwide and once it arrived in London again this year, I decided that I just couldn’t resist a night with the scissor-wielding heart-throb.

So it was that with much excitement, my mum, sister and I squeezed ourselves into the ever shrinking seats at Sadler’s Wells theatre (not an easy feat when you’ve just enjoyed a mega Brown’s burger with extra bacon followed by a devilishly delicious chocolate brownie with cream and custard) for our annual Christmas theatre trip.

From curtain up we were transfixed.

The story follows a similar plot to the movie with a few extra’s added here and unnecessary bits removed there, but all the main sequences were left in tact, including the hair-cutting scene and the bit where flirtatious neighbour Joyce tries to seduce poor Edward, which proved highly entertaining.

Edward himself is superbly brought to life by talented dancer Dominic North, whose elegant staccato movements perfectly capture the spirit of the lonely but loving, doomed figure of the title.

The rest of the cast were also impressive, and there were several cleverly choreographed dance sequences which injected a streak of colour and comedy into the production. Although I enjoyed these numbers, I did feel that they took the limelight away from the centre of the story, which is ultimately the doomed relationship between Edward and his beloved Kim.

The highlight of the show was a beautiful dance duet between our metallic friend and the lovely Kim set against an atmospheric backdrop of ice sculptures and snow.

Although the bittersweet story of forbidden love is somewhat overshadowed by the brilliant set design and clever group choreography, the production was a real festive treat for all the family.

Enchanting and exhilarating, this modern fairytale will definitely leave you with that warm, fuzzy feeling this Christmas.