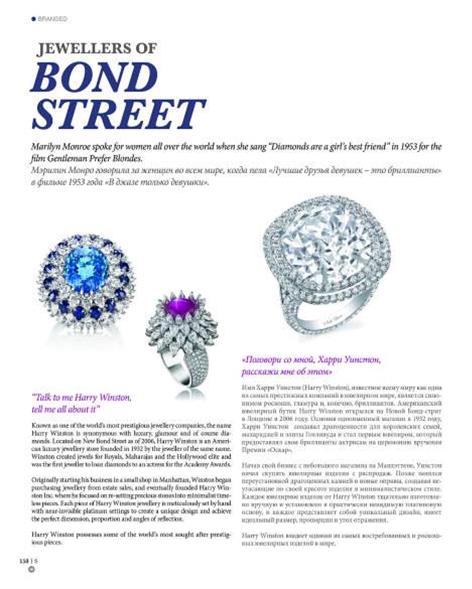 If you are thinking about buying a diamond for someone special this Christmas (or for yourself!) look no further than the Jewellers of Bond Street. In another issue of STATUS Magazine I researched the top jewellers in London to see if diamonds really are a girl’s best friend.

“Talk to me Harry Winston, tell me all about it”

Marilyn Monroe spoke for women all over the world when she sang “Diamonds are a girl’s best friend” in 1953 for the film Gentleman Prefer Blondes. Known as one of the world’s most prestigious jewellery companies, the name Harry Winston is synonymous with luxury, glamour, gems, jewels and of course diamonds.

Located on New Bond Street as of 2006, Harry Winston is an American luxury jewellery store founded in 1932 by the jeweller of the same name. Winston created jewels for Royals, Maharajas and the Hollywood elite and was the first jeweller to loan diamonds to an actress for the Academy Awards.

Originally starting his business in a small shop in Manhattan, Winston began purchasing jewellery from estate sales and opened up the Premier Diamond Company in 1916, eventually founding Harry Winston Inc where he focused on re-setting precious stones into minimalist timeless pieces. Each piece of Harry Winston jewellery is meticulously set by hand with near-invisible platinum settings to create a unique design and achieve the perfect dimension, proportion and angles of reflection.

Now owned by The Swatch Group Ltd, Harry Winston remains one of the world’s leaders in luxury jewellery and continues to possess some of the world’s most sought after prestigious pieces.

One of the most recent additions to Bond Street is British jewellery company Boodles, founded in 1798 in Liverpool. Originally a silversmith and watch-maker, Boodles became Liverpool’s most prominent jeweller in the 19th century and later expanded into London under the ownership of the Wainwright family, finally opening up a New Bond Street store in 2007.

Boodle’s pieces are all handmade and hand polished, and favour balanced asymmetry and unexpected details to create unique one-off pieces. No Boodle piece is ever the same and the company have emerged as a leading retailer of bespoke jewellery, sourcing diamonds and gemstones and designing its own ranges.

Boodle’s latest jewellery collection entitled Wonderland, embraces numerous global influences taking its inspiration from The Silk Route of South, East and Western Asia and the Mediterranean, to produce an exotic range of stunning one off pieces.

So iconic are Boodle’s designs, that the London Victoria and Albert Museum now exhibits the classic Boodles Raindance ring in its permanent jewellery collection that spans 1000 years of British jewellery.

Welcome to the House of Graff

Founded in London by Laurence Graff, Graff Diamonds opened their first store in New Bond Street in the 1960s. Famed for their exquisite designs, the Graff style is one of effortless elegance and ageless modernity.

Over the years, Graff has handled more diamonds of notable rarity and beauty than any other jeweller in the world, including the Paragon Diamond and the Lesotho Promise. The Paragon is a seven sided diamond of 137.82 carats, worn as part of the “millennium” necklace of round, pink, blue and yellow diamonds by Naomi Campbell in 1999. In 2006 Graff bought the uncut 603 carat Lesotho Promise diamond for $12.4 million, which was then laser cut into 26 D-flawless diamonds totaling 224 carats, the highest yield from a single stone.

Graff diamonds has been the target of several high profile robberies, the most recent being in 2009 when two men posing as customers stole jewellery worth nearly £40 million from the New Bond Street store. One stolen necklace alone was worth more than £3.5 million and the heist was believed to be the largest ever in Britain, eclipsing the previous largest jewellery robbery which also took place at Graff’s in 2003.

“To look into a Graff jewel is to glimpse eternity” – Laurence Graff.

With over 125 years of jewellery expertise, De Beers is the world’s leading quintessential diamond company combining the jewel’s rich history and long traditions with contemporary creativity and cutting-edge craftsmanship.

De Beers Consolidated Mines was founded in 1888 by Cecil Rhodes, a British businessman who monopolised all diamond mining operations in South Africa. The name derived from the De Beers brothers, Johannes Nicolaas de Beers and Diederik Arnoldus, whose farm had become the site of a particularly lucrative diamond mine. However, the brothers had sold the claim and later had no involvement with the company that came to bear their name.

In 1927 the company was taken over by Ernest Oppenheimer and despite the challenges of the Second World War, De Beers continued to expand and increase consumer desire for diamonds.

De Beers welcomed in the new Millennium with the 203.04 carat De Beers Millennium Star and opened up their first boutique store in Old Bond Street in 2002. Around this time, the company was also hit by controversy surrounding the role of diamonds in international conflicts in South Africa, particularly with regard to Botswana’s Kimberlite pipes.

Despite these controversies, De Beers remains the pinnacle of the diamond world and continues to celebrate the diamond’s symbol of continuity and eternity though its classically elegant jewellery.

Audrey Hepburn personified the Tiffany Style in the 1961 Hollywood Classic Breakfast at Tiffany’s and every girl since has been enchanted by the Tiffany glamour.

Since 1837, Tiffany & Co. has been the world’s premier jeweller, renowned for its luxury goods and diamond jewellery. Founded by American Charles Lewis Tiffany, the store initially opened in New York City and quickly gained international standing, opening a store in Old Bond Street in 1986.

Over the years Tiffany designs have adorned various luminaries of aristocracy and popular culture, including famous U.S. families such as the Astors, Vanderbilts, Posts, Huttons and Morgans as well as Hollywood Royalty such as Angelina Jolie and Kate Winslet.

One of the company’s most famous pieces is the Tiffany Yellow Diamond, which at 287.42 carats is the largest yellow diamond ever discovered. It was cut into a cushion shape of 128.54 carats with 82 facets, 24 more than traditionally used, to maximise its brilliance. The diamond was worn by only two women during its lifetime, once by Mrs Sheldon Whitehouse at the 1957 Tiffany Ball in Rhode Island, and subsequently worn by Audrey Hepburn in 1961 during a photo call for Breakfast at Tiffany’s.

Today Tiffany’s exquisite designs continue to exude style, elegance and sophistication and no girl’s jewellery box is complete without a piece of Tiffany magic. 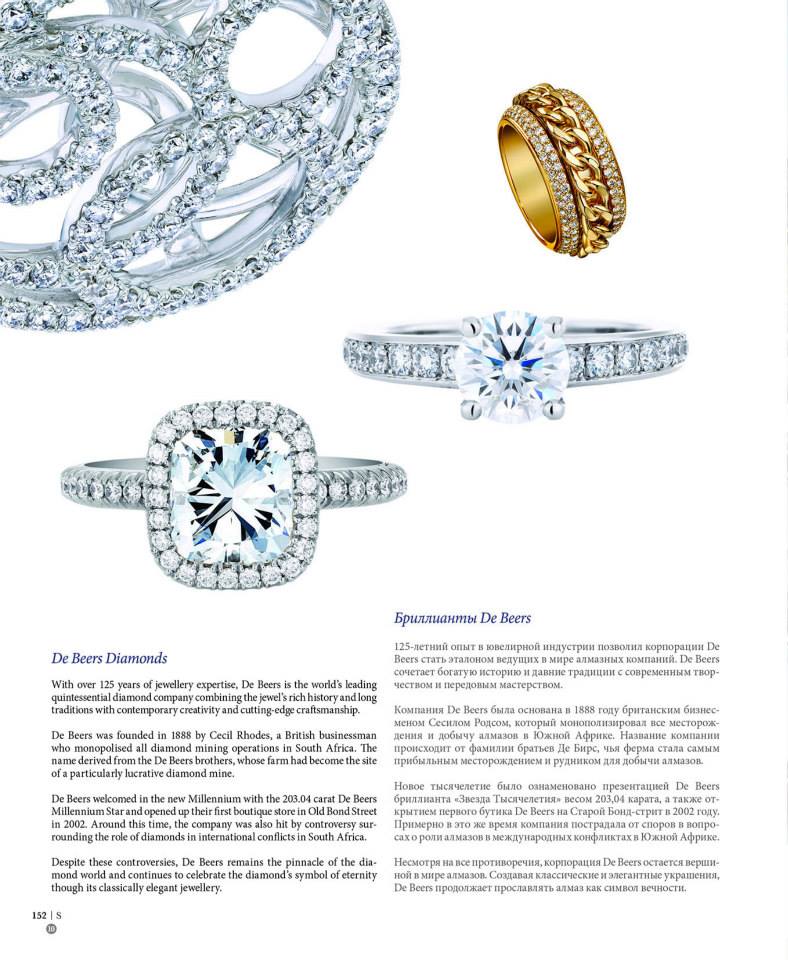