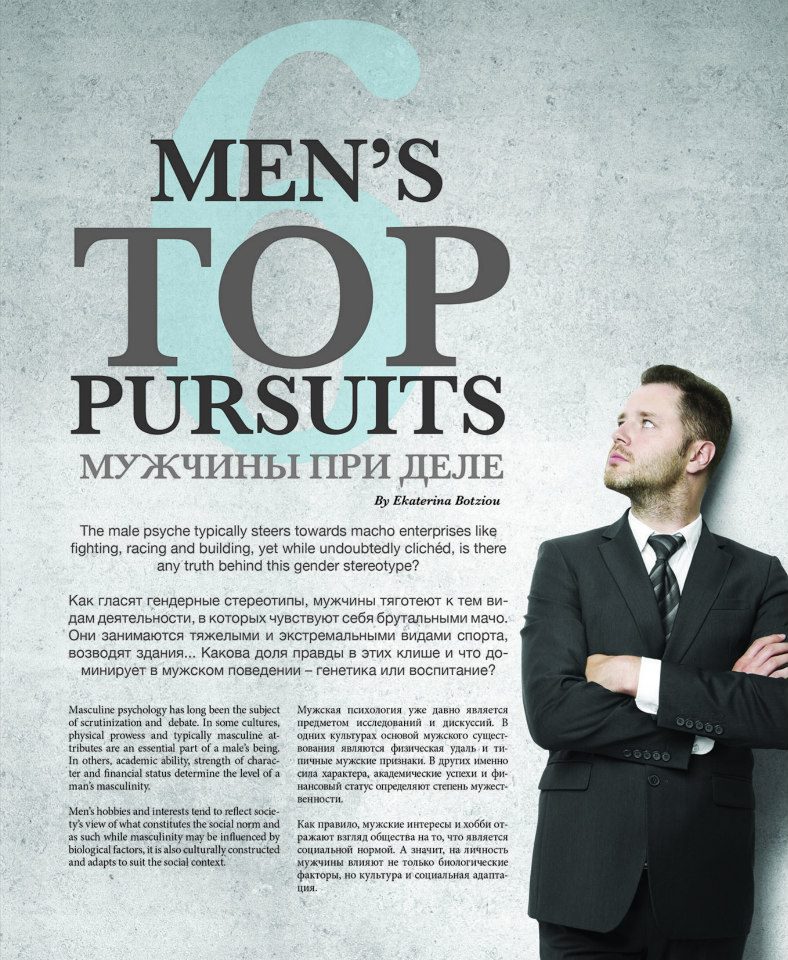 In one of the issues of STATUS Magazine I was commissioned to write an article about men’s top pursuits/hobbies/delights, detailing why they may have a disposition to this or that type of entertainment and how it could be explained from a view of their psychology, physiology and mentality. Not being a man, and not being allowed to mention alcohol, sex, drugs and rock ‘n’ roll (or motorbikes), I was left to do some SERIOUS research.

Masculine psychology and the extent to which it is a result of nature or nurture has long been the subject of scrutinization and debate. In some cultures, physical prowess and typically masculine attributes are an essential part of a male’s being. In others, academic ability, strength of character and financial status determine the level of a man’s masculinity. Men’s hobbies and interests tend to reflect society’s view of what constitutes the social norm and as such while masculinity may be influenced by biological factors, it is also culturally constructed and adapts to suit the social context. 1. Exploring the Great Outdoors: Outdoor pursuits, competitive and extreme sports are heavily influenced by masculine psychology. Direct competition of physical skill and strength is a feature of masculinity which appears in some form in virtually every culture on Earth; risk taking and the need for an adrenaline rush are inbuilt to the male psyche. Fishing, hiking and camping have long been considered ideal male group activities, along with extreme/action sports such as skydiving, rock climbing and snowboarding. 2. Male Bonding: Male friendships were historically cemented around shared activities like bowling, golf or poker, but during wartimes a new sense of camaraderie bonded men into a deeper alliance. Psychologists consistently report that marriages are actually stronger when men have other men to turn to for advice and comfort. “A woman may represent a man’s better half, but his friends are his other self. Whether they involve arguing, competing or doing nothing much at all, male friendships are elemental, and a salve to the soul” – Andrew O Hagan (The Male Bond – live2hustle.net). 3. Awakening the Metrosexual: Historically, male grooming has always been of great importance and can be seen as an indication of social standing. In modern times, social scrutiny and a constant emphasis on healthy living has inspired men to take to the gym and seek out grooming regimes to boost their physique and general confidence, thus equating strength to masculinity.

4. Gadgets and Gaming: Be it communication devices, play station, music systems, sports gear, cars and other electronic equipment, men share a special relationship with gadgets. Male brains require constant stimulation be it visual or physical, and this need can be easily fulfilled through the use of technology. Gadgets provide a sense of supremacy as well as an ego-boost, and owning a product that demonstrates speed, power and expense are all attractive qualities that a man ultimately wants to reflect in his own persona. 5. Solving the Puzzle: From the curiosity of the wheel to the creation of the car, the male brain is driven by the need to find out why and how something works. Men find a great sense of purpose in breaking something down, taking it apart and then fixing it. Since the stone-age, the ability to demonstrate ones practical skills has been recognised as one of the most basic masculine traits. 6. Entertaining the Family: Regardless of age or nationality, men frequently rank harmonious family life and good relationships with their spouse or partner as important to their quality of life. In modern times, with the steadily growing equalization of gender roles, men have begun to demonstrate more feminine values and participate in activities such as cooking, cleaning and spending time with their children. Historically and traditionally a man has always been viewed as the protector and this modern mixing of masculine and feminine qualities has helped to breed a new type of male saviour: the loving father, supportive husband and stable friend.