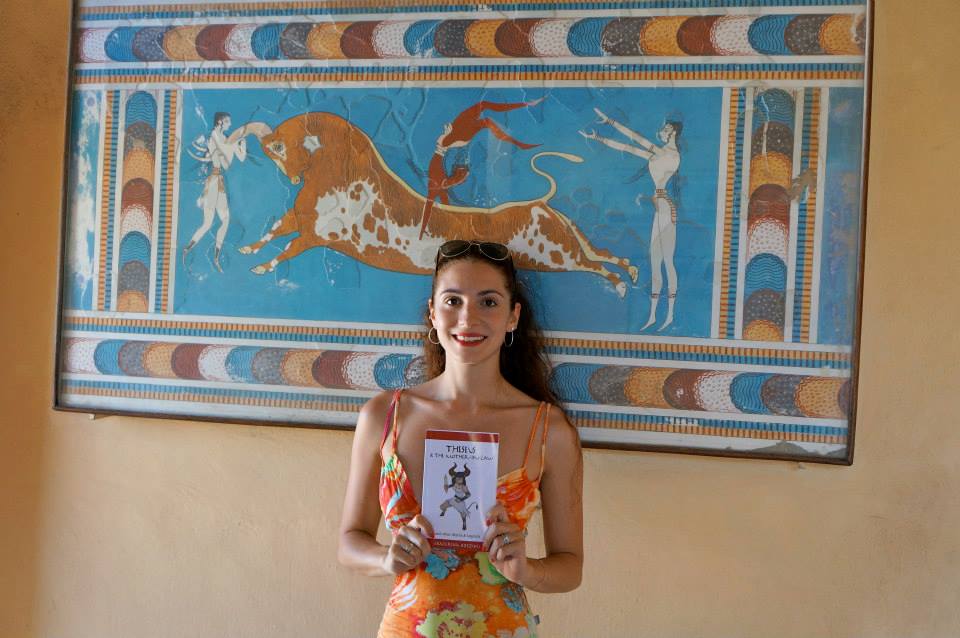 Now that summer is well and truly over I’ve finally got round to sorting out my holiday photo album. This summer I decided to organise a bit of island hopping and tick off a few more ‘Must See’ places on my growing bucket list, which included a few more Greek islands to include in my Greek Girl Abroad series.

It all started in my Greek (Cypriot) man’s homeland of Cyprus but I managed to steer him away from the delights of Nissi Beach and head on toward Crete and then Santorini.

Hopping on a plane from Larnaca, we arrived a few hours later in Heraklion, the capital of Crete. I had decided against staying in the capital and chose a hotel in Koutouloufari, about 20 minutes from Heraklion, which would enable us to travel easily between Heraklion and the far eastern side of the island including Agios Nikolaos and Spinalonga.

Our taxi journey from the airport to our villa seemed simple enough, until we got nearer to the village of Koutouloufari and promptly got stuck behind a large funeral procession…behind the hearse in fact. Positive start all round!

Our stay in the Pilots Villas Resort was very peaceful and we had an abundance of cafes, restaurants and little souvenir shops on our doorstep.

The traditional village of Koutouloufari with its narrow paved streets and old Cretan houses attracts those who want to spend their holidays in the busiest tourist area in Crete – which stretches from Heraklion to Agios Nikolaos, offering many beaches, attractions, sights and activities and is near archaeological sites such as Knossos and Malia – but who prefer to stay in a quiet environment with a traditional flavour and a lovely view of the Sea of Crete.

Hiring a car/scooter is a must in Crete and we visited various places of interest including the Knossos Palace and the island of Spinalonga. If you like your history, Spinalonga is a must see attraction (you can catch a boat from various stops in Elounda or Plaka) and you can spend the rest of the day in the pretty town of Agios Nikolaos.

I have to admit I wasn’t overly impressed by the food on offer in Crete. And the ongoing heavy drone of the cicadas day and night, just about drove me to the brink of insanity.

On a separate note if you get chilly (!) there are plenty of Russian fur shops around – one every half a mile. We counted 15 shops in one day. Business must be booming.

Our stay in Crete ended after four days when we boarded the Hellenic Seaways ferry to our next port of call, Santorini. Described as a ‘high-speed vessel offering advancement and innovation in the passenger services sector’, all I can say is that it should be renamed HELLENIC SICKWAYS. Thirty minutes into the journey, and passengers were spewing all over the place, myself included. The staff even ran out of sick bags. AVOID at all costs!

The major settlements in Santorini include Fira (Phira), Oia, Emporio, Kamari, Perissa, Imerovigli, Pyrgos, and Therasia. Akrotiri is a major archaeological site, with ruins from the Minoan era.

We stayed at the beautiful Aria Lito Mansion Hotel in central Fira town where we were surrounded by bustling cobbled streets and white-washed buildings. Santorini itself is very similar to Mykonos with its lively atmosphere and pretty boutique shops, but the island feels a lot smaller and the black-sand beaches do not compare to the sun-kissed stretches of golden beauty at Psarou or Paradise Beach.

The sunset in Oia was a sight to behold and I would recommend visiting the town even if only for one evening just to experience the beauty of the setting sun – be warned though, the little streets get VERY packed and if you want to get a good spot you should try and get there early.

If you are looking for nightlife, the best place to be is Fira. While Oia is very pretty, all the shops close around 10pm and there are no loud clubs/bars due to the programme of preservation which was set up in 1976 and seeks to preserve, restore and stabilize the traditional Greek architecture of the area.

Buses and taxes go all over the island so transport isn’t a problem – you can even hitch a ride on a donkey (bring your nose plugs) or take a ride on the cable car (bring your blindfold) to get to the old port of Skala where you can hop on a boat and head to the neighbouring volcanic island and swim in the hot springs.

In my personal opinion, two full days is more than enough to see the sites of Santorini – unless of course you plan to spend time just relaxing.

Rather than getting the dreaded ferry back to Crete, we flew back to Cyprus via Athens – only Easyjet go direct from the UK to Santorini.

If you do travel to Santorini I would highly recommend a spot of Greek island hopping with perhaps a stop off in Mykonos – a week is enough time to visit both islands and see all there is to offer. All in all, Crete and the Greek islands in general have so much to offer but do bear in mind that overdoing the travelling can leave you feeling exhausted (and very sick!).

Next stop: I think I’m going to enjoy the comforts of home for a while…at least until the ferry nightmares stop…! Opa!

If you would like to read more about Santorini do check out my friend Rebecca Hall’s website Leaving Cairo where she recently published a post on the best of the island.