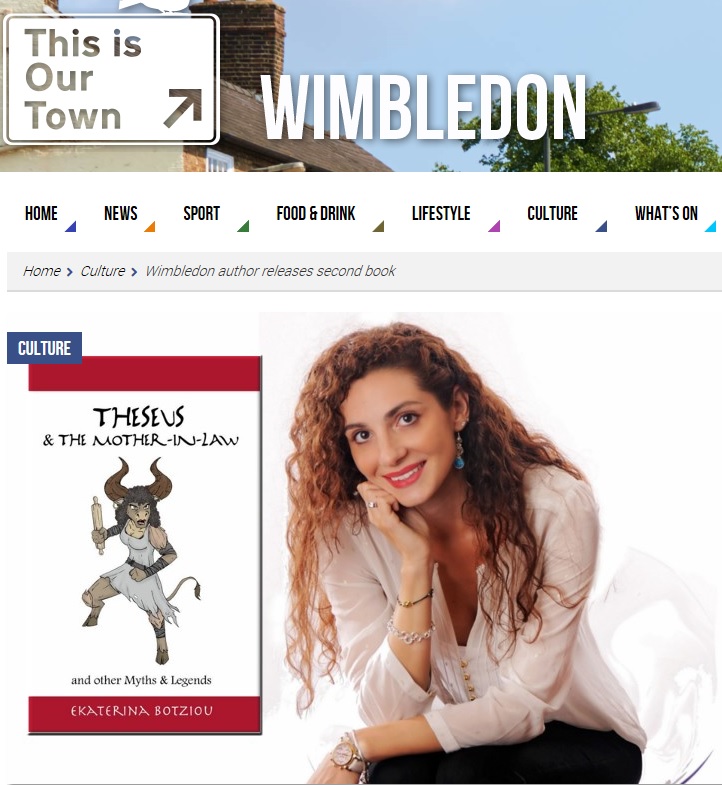 Ahead of my second book release, This Is Our Town Wimbledon have kindly featured me on their website! You can read the original post here.

A year on from the widespread success of her first novel, Wimbledon-based author Ekaterina Botziou is celebrating the release of her latest book Theseus & the Mother-in-Law and other Myths & Legends.

This is the second literary outing for Ekaterina, 27, who exceeded expectations with her first book, Greek Expectations: The Last Moussaka Standing, which reached number 2 on the Amazon Free Kindle download list in its first promotional month. Her new book is described as a parody of all the Greek myths and legends, from the tale of Heracles and his twelve labours to Theseus and his battle with the Cretan Minotaur.

It has been a successful year for the law graduate who was named February’s Young Hellenic Professional of the Month by New York based mentoring company Philo4Thought. Alongside juggling a full time job in Mayfair’s finance sector, Ekaterina is involved in a whole host of projects from film to fashion, and also writes for various British and European publications including the Huffington Post and the Love Wimbledon Guide. Her self-titled blog Ekaterina Botziou: It’s all Greek to Me! (www.ekaterinabotziou.com) was recently nominated for a slew of blogging awards and she also runs popular facebook group The Greek Wives Club.

Speaking of her writing accomplishments, Ekaterina credits her family as her greatest inspiration, “My first book was a tongue-in-cheek look at life in the Greek community and I relied heavily on the experiences shared by my family and friends. The idea for my second book came about when I was still writing my first. As a child I devoured all the Greek mythological stories and was fascinated by the historical aspect to many of the legends. My grandmother in particular had a deep interest in the mythicism of ancient Greece and I think many people find the combination of history and fictional narrative highly appealing.”

Written in a unique witty style that has garnered Ekaterina rave reviews, the book is peppered with fun facts and amusing anecdotes, voyaging through the age of Immortals and the golden era of Greek heroes.

Theseus & the Mother-in-law and other Myths & Legends is available to buy from Amazon Worldwide in Paperback and on Kindle from the 26th September.