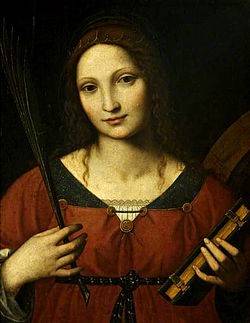 For those of you who may not be familiar with Name Days, it is a tradition amongst many cultures that consists of celebrating the day of the year associated with one’s given name.

On someone’s Saint’s Day, friends and family will visit that person without invitation and offer their wishes and sometimes a small gift. As a child I found this absolutely wonderful as I technically had two birthdays a year. As an adult I spend my Name day in hiding, quivering with fear every time the phone rings or there is an unexpected knock on the door.

My name day is today, the 25th November – I was named after my Greek grandmother Ekaterina, who was named after Saint Merkourios / Aikaterinis, Katerina  / Ekaterini of Alexandria (Catherine).

Ekaterina e-kateri-na,  is of Greek origin (obviously), and the meaning of Ekaterina is “pure”.

There is also a possibility that the name derives from Hecate, the Greek goddess of magic and also from the Greek word “katateino” meaning torture. Saint Aikaterine of Alexandria was born a pagan but died a Christian martyr after she was tortured and died on the breaking wheel for condemning the persecution of the Christians.

The Catherine Wheel firework is named after her.

Well what else did you expect?

Of course on this day many other variations of the name Ekaterina are also celebrated including: Katrina, Katy, Catherine, Katia, Karen, Kitty, Katelyn etc.

A forgotten Name Day is ranked as one of the highest insults in Greek culture and will not be easily forgiven. So here’s wishing everybody who was named after me…er…I mean Saint Aikaterina / Katherine, a very happy name day! Xronia pola!